Discord is one of the oldest platforms for communication. It was launched in 2015. Discord gains so much popularity in such a less period. It was generally created for communication and mostly used by gamers and YouTubers. People are getting more interested in this application or platform due to its privacy, features, and all.

No worries. We have added everything to this article. Let’s have a look.

What is Discord Spoiler Image?

You must hear the word spoiler if you are keen on watching the upcoming movies or episodes. You must be wondering about the movie or episode that what will happen next in the series. For instance, a spoiler means a part or fiction of the upcoming trending content that most people want to see.

It becomes more interesting when you keen to watch the whole movie with suspense and someone just shared the spoiler to ruin the experience.

Therefore, to prevent such information. Discord has gone through a lot of information and added a spoiler warning tag in the picture. This shows the users about the spoiler. It now will depend upon the users that they want to see the spoiler or not. 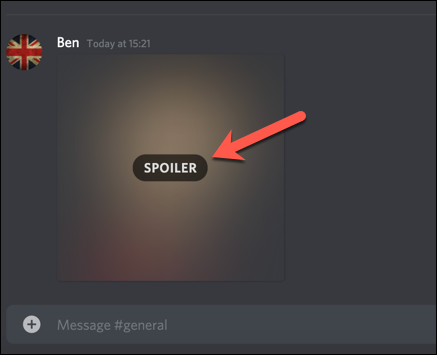 Below we have added one of the common examples of a spoiler image.

How to View Discord Spoiler Image?

It is pretty easy and quick to view discord spoiler images. You only have to click on the image tag shown on the screen. The image will automatically get visible on the screen. For instance, we do not suggest clicking on such images. It can ruin the whole part experience.

Important note: Discord spoiler tag is not only for hiding the spoilers of movies, episodes, etc. Sometimes, it often gets used for doing fun with friends.

You may also like to read, How to Fix Discord Javascript Error?

How to Make or Send Discord Spoiler Image?

You now know the actual meaning of spoiler image. You now even know the way to view the image and what does it actually means. Therefore, if one wants to know about making or sending discord spoiler images to someone? Then, prefer following the steps we have added below.

Let me convert it to the sections.

Spoiler Text & Images for the computer – 1

It is a quick process. You can send it quickly as compared to smartphones. Let’s have a look at the process.

You can also mark the text as a spoiler using the spoiler button added in the text box.

Spoiler Text & Images for the Smartphone – 2

Now, we know the process for sending spoiler text and images on the computer. However, not everyone has access to a computer. Therefore, we have added a process of making or sending discord spoiler images on the smartphone.

Here we come at the end. We do know about the Discord application. It is one of the famous applications that is often used by YouTubers and Gamers for communication. However, this application is much more.