Nowadays online video streams are practically everywhere and there are countless websites and platforms that provide them. Most people tend to watch numerous video streams on a daily basis, with some even using streaming platforms such as Netflix and Hulu to watch TV shows and movies. 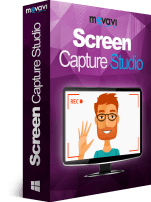 The only problem with watching online video streams lies in the fact that it requires a stable internet connection – and that may not always be guaranteed. That is why the Movavi Screen Capture Studio can prove to be useful, as it will let you capture and save any video stream and then watch it offline later.

To accomplish this, you will need to use the Movavi Screen Capture Studio to record the region where the video stream is playing. While that may sound complicated if you’ve never used screen capture software in the past, all that it really entails is:

Further details on how to record online video streams can be found at: http://www.movavi.com/support/how-to/how-to-capture-streaming-video.html.

Because it is such an intuitive and straightforward process, you should have no problem capturing the video stream that you want. In fact that same user-friendly nature is present throughout all of the Movavi Screen Capture Studio’s features – and is part of what has made it so popular.

Using the other features of the Movavi Screen Capture Studio will allow you to cut and combine video segments, enhance the video quality, apply special effects and filters, insert customizable text, add audio tracks, and much more.

By spending a few minutes and familiarizing yourself with the features of the Movavi Screen Capture Studio, you’ll be able to experiment and see exactly what they do. Once you’ve done that, you’ll find that you’re able to really tap into its potential – and could even create professional-looking videos of your own to publish online.