Android has really bloomed up in the world of smartphones in last few years. Various brands are struggling in the market to come into existence with the high profile brands. Android Nexus 7 is another innovation by Google that is expected to attract much audience through its look and functionality. Designed by Asus, Nexus is made beautifully that comes with the latest version of operating system Android 4.1 Jelly bean. Google promised to render an extraordinary experience to the audience with faster user interface. Apart from all this, here are some more features of Nexus 7:

Android Nexus 7 comes with a sleek body of 11mm weighing 340 kg. the edges of handset are fixed with volume rocker and power button on the right and a USB port with headphone socket at the bottom. The rubber finishing at the back of phone makes the phone easy to carry. IPS display of the phone comes with HD resolution which is sharp; 1200*800. The layer of corning glass proves out to be tougher than Gorilla Glass. The glass is scratch resistant. The display is bright with vibrant colours. 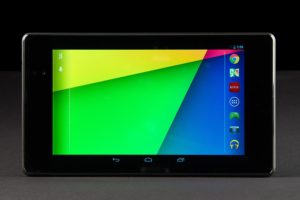 Nexus 7 comes with Android 4.1 Jelly bean, then new operating system in the android market. There is a quad-core CPU running that too at 1.3 GHz. Powerful GPU allows you to carry out 3D gaming smoothly. The Tegra 3 chipsets lessens the battery consumption. Through this operating system, user gets to experience enhanced performance with refined user interface. Users can easily enjoy improved web browsing with new media support.

Like other smartphones, Android Nexus 7 also captures clear and crisp pictures. There is a tiny webcam at the top of the screen of 1.2 megapixel that can be used for video chat. There is no particular camera app installed for carrying out video chatting. The main camera allows you to capture pictures and record videos side-by-side. You can enjoy clicking pictures with optimum camera clarity.

Battery life of Nexus 7 is standard. Users can enjoy good battery life on their handset with the addition of new apps and features as well. On the contrary, there can be worst effects on the battery if something catastrophic occurs with Nexus 7. Google has promised eight hours of continuous use of handset without any difficulty. In short, battery renders solid performance.

Android Nexus 7 is a quality handset that is designed with NFC support. The latest version of Android operating system, Android 4.1 Jelly Bean, supports the functioning of the phone. In addition, users can enjoy Google play freebies. On the other hand, there are some demerits as well. There is weak IPS display that makes some content hard to see. Limited storage options don’t allow you to store much android apps in your t

Android Nexus 7 values at £159. So, for a budget tablet, Nexus 7 is just incredible.