The electronic cigarette industry is developing almost in spite of the FDA’s reluctance to regulate the devices. However, with a reported number of 2.5 million consumers in the United States, it seems only natural that some major industry names are looking to cash in on this flourishing market segment. In one such move, Reynolds Inc. has recently announced that it will soon release a new smokeless product. This announcement was made on the same date that the company heralded its second quarter net income increase of 35 per cent, up to $443 million. 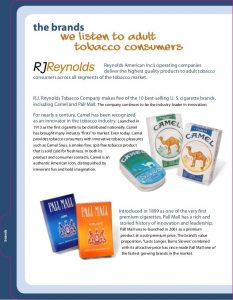 It remains rather unclear how Reynolds plans to attack the e-cig market, and CEO Daniel Delen provided little details, so as not to divulge too much to the competition. However, he did make matters clear enough when stating that the company plans to release new products on the vapor market, as well as in the NRT and nicotine extract niches. In 1996, Reynolds released what has since become known as the precursor to the contemporary electronic cigarette—the heated cigarette Eclipse hit stores precisely ten years before the arrival of the China-patented e-cig on U.S. markets. The Eclipse is still being sold on request to wholesale and retail commercial outlets.

Although Delen spoke scarcely about the upcoming e-cig release, word through the grapevine has it that Reynolds Inc. plans to come out with a new electronic cigarette, Vuse, on selected markets. Moreover, they will also be introducing smoke-free pouches and pellets on the same markets. While some retailers claim they already carry the Vuse, company representatives refused to make further comments on the matter and said they would return with details once the official launch date approaches. Since comparing tech specs, charging times and other specific details is pivotal to the electronic cigarette experience, the Vuse will have also been reviewed by then. If you’re looking for more information about electronic cigs and specific brands, you can read more about it here.

Meanwhile, Delen made it very clear that his company’s efforts will be channeled toward building an appropriate conversion rate on the e-cig market niche. The executive cited high trial levels, but with low conversion, which, he says, is because e-cig producers don’t invest sufficient funding and attention into manufacturing devices that the end-user will want to return to. Given the fact that Reynold’s past successes include the innovative capsule-crush menthol variant of Camel cigarettes, it might just be that, this time, the technological future of e-cigs is in good hands.