If you have not played any of the past games in the series, don’t worry you are not only the one who finds this game’s story incomprehensible- the ones who have played the past games feel it too. The game confuses you a lot and makes it very tough to differentiate between the good guy and the bad guy too. The storyline is confusing and it is hard to get the solid plot out of it. 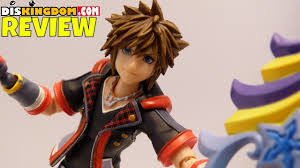 Sora is the protagonist of the Kindom Hearts 3 who brings that vibrant and colorful aura just like any Disney movies bring. The protagonist plays its part in the lands of Toystory, Hercules and Tangled with the Donald Duck and Goofy. As the game proceeds, you have to battle against the enemies. You will get to fight forest monsters to large titans from Greek legends in this game.

The good thing about Kingdom Hearts 3 is the combat formats which took place in real time. Not only the options to attack, dodge, or use items, Sora can also slow down the combat to make strategies and decide tactics for the next move. Moreover, Goofy and Donald Duck get the important parts too such as they can go way aggressive and get slow defensive in the combats depending on what way we want them to go. Although in most parts of the game they are contributing enough to the game, still this adds more value to the game.

The combats in the Kingdom Hearts 3 are the USP of this game- from the power packed attacks which are mostly like Disney oriented like bumper cars with cannons, giant teacups, and a carousel. No matter how much time you spend on this game, it doesn’t come to the stage which we call “Boring”. This game never takes you to that boring place- Never!

So, if you are concerned about the worlds of Disney you will dive into, you will get to the places like the Kingdom of Corona from Tangled, San Fransokyo from Big Hero 6, and Monstropolis from Monsters, Inc. Although there are many more places you can take a ride to which give feels of perfect Disney setup- vibrant and colorful. Some people might say that how can the different art styles can get a blend in one game but honestly, it has worked great for the game. For example, you go to Corona which is full of forests, swamps, and the city just like Tangled movie while Hercules gets hilly grasslands, riverbeds, and a town just like the movie. This doesn’t make a difference as it all looks like fairy tale fantasy experience and you won’t think of it that way.

The visuals are really amazing both from technical and designing point. In combats, you get to see the real power of them when the fps works really great even when so much is happening around. The game never slows down and holds up to each second. It really amazes everyone with the amount of work Square Enix has done on the game and the hard work speaks out load making the game a standout.

The game perfectly hits the spot in terms of gameplay with perfect visuals and action packed combats. But, does Kingdom Hearts 3 serve the purpose for all?

Though it is Disney World and targets the larger crowd, but the game fails in the storyline. As the protagonist, Sora has a nemesis, Organisation 13 who exchange words with Sora between the gameplay and if you are new to the game, it all might go over your head. Most of their exchanges are coming from the past games and are really unnecessary at a time- just for confusion.

Yes, the game has a menu option called Memory Recap which can give you the recap of the game but it is not sufficient and couldn’t do the best job possible. Square Enix could have perfectly designed this one by giving how they came to the Kingdom Hearts 3 and answer more questions like this. It would have been great for the new gamers then. You can also choose to explore some of the latest online games through amazing AliExpress Offers on electronics Items.

Kingdom Hearts 3 is a nice role-playing action game keeping you on the edge of the seat- thanks to the new power that comes every now and then, stunning visuals and action-full combats. But, if you are looking for the story, then the game goes haywire at times. So, if you want to dive into a vibrant and colorful world Disney through a combat-full game, Kindom Hearts 3 it is.