All these countdown timers are made using jQuery and most of the websites are filled with exciting jQuery styled plug-ins. Let’s see some cool countdown timer scripts that can be used within any kind of projects.

KK Countdown is a simple jQuery plug-in that will count down to specific date in the future. KK Countdown is developed by Krzysztof Furtak and by now about six versions of it has been made. 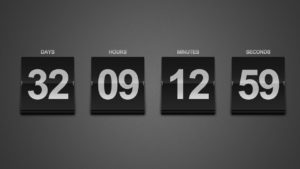 A well ordered jQuery plugin for showing a countdown timer, which will show remaining days, hours, minutes and seconds with an animation on every second.  The timer is free of images and is completely designed with CSS. Moreover, the plugin is also available on Github.

A countdown that can be integrated very easily, is jQuery compatible and is quickly skinable.  The Littlewebthings timer has a start and stop functionality as well as a reset option. Furthermore, it a free countdown timer that supports Standard time (UTC).

Flip Counter is another jQuery Countdown timer plugin developed by the BloggingSquared.com that transforms a boring number into a full-size and gorgeous analogue display. In the version 1.2 animations can be paused or resumed.

A countdown timer plugin made by Zack Perdue that has cool animation which will scroll down the digits instead of altering the time without an animation. The updated version of timer has units of time as separators than that of the colon symbol.

A countdown timer which can be developed in a medium difficulty level, the plugin is developed by Adi Purdila and is published on webdesign.tutsplus.com as lessons. The timer is really beautiful but not a dreary one. The source files which can be further modified are available for download from the site.

Circular Countdown timer is a premium timer that will cost $5.  This clean and responsive circular countdown timer is a modern and unique and is very easy to integrate. The download file is included with the language packs and also the documentation. Moreover the timer has easy color choices and lightweight markup.

These are seven of the best countdown timers that can be used within our projects. Most of these are free or cost minimum for the great help these countdown timers provide. If you are a web developer this inevitably is vital resource for you.