Android is far better now than the old Symbian software which were used in earlier. Android supports a huge number of apps which includes Bluestack app player download and there are merely no apps that are not supported by the android software. Android operating system provides in-built anti-virus for every cell phone. Customers are allured by the wide range of applications that this operating system provides. The android operating system generally comes in Samsung, HTC, micromax, spice, onida, I-ball phones and Android 4.1 Smartphone. This OS also supports numerous animations, HD videos. The home screen can be customized with widgets. It supports exciting features like editing in Picasa, a much faster browsing of the internet, sharing and uploading much more stuffs. There are many android phones and tablets available in the market.

BlueStacks is a software development company based in Silicon Valley that produces BlueStacks Cloud Connect and BlueStacks App Player applications. These two products are equally designed in such a way so that it enables Android applications to run on Windows, Macintosh computers and Windows tablets and also in mobiles. Rosen Sharma, CTO at McAfee and a core member of board of Cloud.com, created the company in 2009.Normally, if someone wants to run Android apps on any other platform other than on an Android device, it is essential to install a Software Development Kit to support the android operating system. 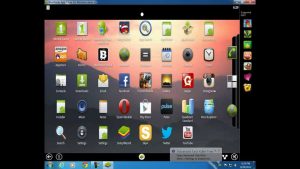 After logging in, it is just similar to browsing Android Market on any Android phone. All you have to do is find the apps which you require to download and install them and then launch it. It should be noted that apps that arebeing installed through Android Market has to be launch from the Android Market. The apps do not appear on the launcher of BlueStacks.