Lenovo Vibe X3 has been a great product ever since its release in December 2015 and it has garnered good attention from the user community. At the same time, LG Nexus 5X made news in the smartphone market on its release in October 2015. let us Compare Lenovo Vibe X3 vs LG Nexus 5X. Vibe X3 comes with dual sim-card technology that uses nano sim-card sizes. It also supports the dual stand-by mode for calls. LG Nexus 5X comes with a single sim card option that supports nano sim-card technology. Nexus has always followed its mode of single sim card manufacture and it sticks to its de facto standard. Vibe X3 is available for a price starting at 19,999 rupees in the market whereas the Nexus 5X model is available for a higher price of 30,695 rupees. Vibe X3 comes in a range of two different colors black and white. On the other hand, Nexus 5X comes in three different colors to choose from, namely Quartz, ice and carbon. 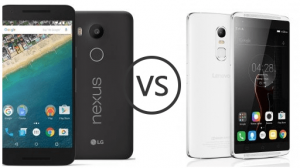 Vibe X3 works on two processors at the same time, making it one of the powerful processing ability smartphones in the present generation. It comes with one dual core 1.8 GHz processor and another quad core 1.44 GHz processor for extensive support. Nexus 5X works with an even better processing system with its two combined processors that include a hexa core 1.8 GHz processor and a quad core 1.44 GHz processor, giving it an upper hand in the specifications of processors when compared to Vibe X3. X3 comes with a display screen of size 5.5 inches, with its IPS LCD capacitive screen with multitouch support. The screen supports HD resolution at 1080 x 1920 pixel quality. The screen occupies most space on the body and looks absolutely brilliant with the right colors. LG Nexus 5X comes with a slightly lesser sized display screen of size 5.2 inches which supports the same resolution quality. Both these screens come with an extra protective Gorilla glass coating.

Both these smartphones work on the android operating system where the Vibe X3 works on android v5.1 (Lollipop) whereas the Nexus 5X works on the latest version 6.0 (Marshmallow). It is quite expected of Nexus 5X to support the latest version since it is a direct product supported by Google, which owns the Android operating system. With an even better animated display and great support for all functions, Nexus 5X gets good points for its operating system quality. When it comes to the clash between which phone has better battery backup time, Vibe X3 gains the upper hand with its non removable Li-Po 3500 mAh battery. Nexus 5X comes with a battery specification of non removable Li-Po 2700 mAh battery that provides almost similar backup time. In general, Vibe X3 promises to provide a back up time of 30 hours in 3G mode of operation.

The 32 GB internal memory version of Vibe X3 is strictly recommended to users who look for more space on their phone. It does not support a dedicated memory card slot for external memory and needs to be inserted in the second Sim card slot to utilize the external memory. Hence, users who use the second Sim and still want to use the external memory will find it difficult to switch between the both. When it comes to Nexus 5X, there is no slot for utilizing the external memory, which completely rules out the option of using more space than what is provided. Vibe X3 comes with a better RAM space of 3 GB which promises very good user functionality with its ability to multitask many applications easily. Nexus 5X comes with a RAM of size 2 GB, which also provides the best user experience for its hardware specification. These Android phones cannot be compared in terms of RAM because they come with a different processor specification altogether.

The camera quality for Vibe X3 gains better points than Nexus 5X with its rear camera providing a picture quality at 21 MP with features like phase detection autofocus and dual LED flash. Its front camera also provides great support for clicking good quality images at 8 MP. It allows the user to record videos at a quality of 2160 pixels, which is estimated as the ultra HD quality in smart phones. Meanwhile, Nexus 5X supports a rear camera of quality 12.3 MP and a front camera of quality 5 MP. Though the specification looks less, the camera clicks amazing pictures at all light conditions. It even supports the ultra HD video recording option at the same 2160 pixel quality.

Both these phones are good in their own way, with each phone scoring great in their respective features. Lenovo Vibe X3 gains its upper hand in features like the RAM, the battery time and the camera quality, not to mention that it is available for a lesser price which is yet another deciding factor in the Indian markets. LG Nexus 5X scores better with its processor, body and screen quality. Even though it comes at a greater price, the LG brand makes it worthwhile since many prefer brands these days.

Next Post All you need to know about Phone Cases