Increasingly, people are wondering if they need to continue to use Windows. As the de facto standard for desktops and laptops, many people assume that Windows is the only viable option available. In reality, users have a number of additional choices available. Further, there are other classes of computers to consider as well. Here are a few tips for people trying to decide between using Windows and using Linux. 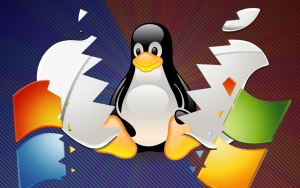 Almost all desktops and laptops come with Windows installed, but there are a few manufacturers who will offer PCs without an operating system. If Windows comes on your new computer, it will likely serve you well. If your computer does not come with an operating system or if you are building your own computer, consider using Linux. Linux is free, and its many distributions can be downloaded online. Linux is also great with old hardware, and its hardware support for old devices is superior to that of recent versions of Windows. If you will use your computer to browse the Internet, check email and create documents, Ubuntu, Mint, Fedora and other Linux distributions will work admirably.

It should be noted, however, that there are certain times when one option will be superior. If you need to run applications that only support Windows, Linux may not work. VirtualBox, a virtualization program, may be able to run programs, and WINE offers some compatibility for Windows programs. If these options do not work, you may need to stick with Windows. For especially old hardware, on the other hand, Linux might be the superior choice. Windows XP will not be supported indefinitely; Linux distributions, on the other hand, will likely continue to support legacy hardware.

While Windows is the default choice on desktops and laptops, Linux has become the default choice on servers. More than two-thirds of all websites are served using Linux, and nearly all major websites use Linux or a different Unix-like operating system. If you are installing your own server, the power, flexibility, cost and stability of Linux makes it the best choice.

In some situations, however, you may wish to use Windows. For small businesses, Windows servers can function well. If you are hosting your own website, Windows may make it easier to fix any problems that arise. While Windows is inappropriate for especially large websites, most businesses do not receive the volume of traffic that would mandate Linux or a similar operating system.

Other Reasons to Install Windows or Linux

Computer science, computer engineering and IT students have been moving to Linux for years, and this trend continues to gain momentum. However, students will likely need to support Windows in the future, so spending some time working with Windows may be beneficial. That said, students who have only worked with Windows will benefit from trying Linux; Unix-like operating systems are becoming more popular, and having some familiarity with Unix concepts can help.

Previous Post All you need to know about Phone Cases