The world of mobile communications and technology has turned on its hand because of the Android Operating System. “This particular OS offers different features and a wide functionality, all of which is based on an open architecture that’s threatening to blow away everything else in the market. However, one problem that individuals might face is that the features that can be found on Android devices often drain the battery quickly”. Therefore, it is essential for the users of Android devices to proactively and intelligently manage the energy that exists in their batteries. There are numerous power-saving options that can be used by individuals, either individually or as a combination and are mentioned below: 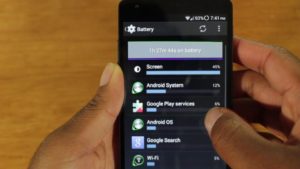 1-     The first step is to discover which feature is using the most power of your Android device. The device will provide a complete list of the features or applications that are using the battery, along with the percentage consumed. The battery is usually hogged by the display the vast majority of the time and you can make adjustments accordingly.

4-     People can also adjust their screen timeout to the shortest length of time that’s been offered. This setting basically instructs the device to turn the screen off after a certain period of inactivity has elapsed. The shorter this period is, the less battery will be used by the display. The settings option will be different for every phone.

5-     The wireless feature should be turned off whenever it is not needed. A substantial amount of power is used by the wireless networking transmitter. Even when the device is not connected to any network, the transmitter will continue searching for a network on a regular basis and thus use battery.

6-     The Bluetooth feature should also be turned off by users when it is not needed. This feature works like the Wi-Fi and will constantly use up your power.

7-     The GPS feature should also be turned off when not in use. When the GPS receiver has been activated on the device, it will constantly look for satellites and its processor will be preparing information to any application that may require it.