It’s the Samsung Galaxy S8 launch day, which is certainly going to give Apple something to chew over ahead of the prospective iPhone 8 launch in September. Read on to find out all about the S8’s upcoming rival.

Apple released the very first iPhone way back in 2007, re-shaping the landscape of mobile phones forevermore. Now 10 years on, Apple is reportedly planning a major revamp of the iPhone line-up – and it’s tipped to be called the iPhone 8.

We weren’t exactly thrilled by the iPhone 7, seeing it as an incremental upgrade that failed to deliver on battery life. But the hope is that Apple is pulling out all the stops for the iPhone 8 Smartphone, a theory which recent rumours and leaks appear to back up. 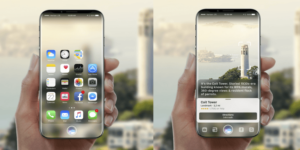 Read on to find out all about the iPhone 8. Or alternatively, if you’re just looking for a brief overview of the iPhone 8, scroll down to the summary at the bottom of this page.

Here’s a breakdown of the most recent iPhone 8 news, as it happened.

Stainless steel chassis, glass design: Rumour has it that we’ll see a metal iPhone 8 frame, with one model getting an all-glass design to allow for wireless charging.

Certification: Apple could make the iPhone 7 IP68-certified water-resistant, meaning it could be submerged for 30 minutes at a depth of 150cm.

Apple could get a dedicated “function area” on the bottom of the screen, emulating the MacBook Pro Touch Bar.

LED screen and USB-C: A report claims Apple will introduce OLED displays to the iPhone for the first time, as well as support for USB-C connections.

The iPhone 8 will use a flat display on all models, rather than the curved screen we’d been expecting to feature on the top-end iPhone 8 variant. That’s according to KGI Securities’ Ming-Chi Kuo, a prominent Apple analyst with a good track record for iPhone leaks. Meanwhile Apple is also working on iPhone 7S variant to launch in Q3, 2017 this year.

Apple planning AR features: A Bloomberg report detailed how Apple currently has a team working on augmented reality applications for the iPhone, and is developing depth-sensing technology that would enable this.

Rumours about an exact iPhone 8 release date are light, but Apple is fairly predictable. That’s why we can take a ruddy good guess at when the iPhone 8 will launch. Google

Photography: As far as the camera goes, KGI Securities believes that Apple will carry over the dual-lens camera from the iPhone 7 Plus, although it’s not clear whether this will be available on select models. The only specific change mentioned is that both lenses (wide-angle and telephoto) will feature optical image stabilisation; currently, only the wide-angle lens features OIS.