Previously, routers such as TP-Link, Linksys and D-Link were dominating the whole wireless router market. Almost every other person owned one of these master pieces. However, it seems like as if Apple has made the entry in to the “dominating” list of wireless routers as well. And as a matter of fact, the wireless routers from Apple are now considered competitive against Linksys, D-link and TP-Link. However, I must admit the fact that the Apple wireless router are indeed gaining a lot of attention. In fact, it is even getting even more popular than the previous state-of the-art wireless routers. Personally speaking, what I think is that the main reason behind the success of Apple wireless routers is the pre-build image of Apple – people always think that Apple is the most high quality gadget provider while keeping in mind  the success rate of their flagship products; for example iPhone, iPad and iPhone. But there is still no doubt that the 3 pieces of wireless routers provided by Apple are simply erotic and worth being called masterpieces; in fact, the quality of the connections it provides and the strength of signals is purely awesome. 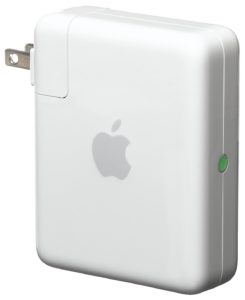 So enough of the ado now; let us come to our today’s main topic now. What we will be showing you today is a tutorial on setting up any of the Apple wireless router. But before beginning I would like to acquaint you guys regarding the three wireless routers which are provided by Apple. Here are the following –

Step 1 – The first step which you need to do is not compulsory. It is just a type of an advice in order to ignore problems in the future. So what you need to do is that you have to connect your internet to the PC via a wired connection and then make sure that is working

Step 2 – Now insert all the necessary wires to a favourable place on the router. Make sure that all the lights of the router remain to be on. This will show that the router has successfully discovered the internet connection.

Step 3 – Install all the drivers which are required

Step 4 – Now open the wireless connections option on your PC

Step 6 – Try to connect to it and the configuration will now start automatically.

When done, you will now have your Apple Wireless router settled up.