When someone says “tech city” there are a few obvious locations that come to mind: Silicon Valley, London, Tokyo, Singapore…

But there are some lesser-known cities that are also responsible for the impressive technological developments that wehave been seeing over the last few years. These cities have an ingrained culture of tech research and development but they just don’t get the same attention as the rest.

If you’re looking to start-up something new, you might want to consider relocating… 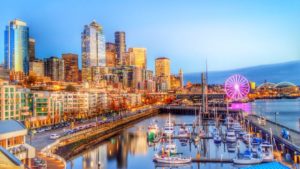 Seattle is potentially one of the best cities in the world to be a tech start-up. Former Microsoft and Amazon employees have left the Valley to open small businesses and tech start-ups. Forbes reported that the Seattle area is a consistent performer in tech company growth, with a 45.5% increase last year.

There are a number of reasons Seattle is a toplocation to be a tech company: the costs of housing and energy are lower when compared to San Francisco; Seattle is home to a diverse economy composed of many different industries that continued to grow in the recession; and on top of that, the state offers no income tax and maximum tax incentives for high tech companies.

In the 90s almost 50,000 people moved to the city for its tech potential, meaning it’s the place to be techie.

This city in the United Kingdom is renowned for its prestigious university, but often gets overlooked in favour of London and its ‘Silicon Roundabout’ reputation – a reputation that, according to the Guardian, it is undeserving of because only 10% of the companies at Silicon Roundabout are actually primarily tech.

The fact that a major research institution is based there gives Cambridge deep roots in hard tech such as biotechnology and engineering. It also provides start-up companies with a pool of budding software engineers. On the financial front, the cost of living (and therefore running a business) is significantly lower than in London, giving the city even more appeal.

The city is home to 1,535 companies and in the last 15 years, 12 tech companies in Cambridge have hit $1bn valuations.

UK plc and plastronics pioneer Plastic Logic in fact moved its operation in 2011 from Silicon Valley back to Cambridge where it started, reversing the trend of UK start-ups moving to America.

With a population of just under 600,000, Glasgow is a relatively small city known more for whiskey and the manufacturing industry. However, the government has been funding schemes to incentivize the creation of new tech companies.

In 2013, Glasgow beat cities like London and Bristol to win a £24 million grant to make it one of the UK’s first smart cities. Traffic apps, real-time train and bus information, and other technologies will be developed that will help city services run more efficiently.

Edinburgh, like Cambridge, also has the credibility and creativity of a university, as well as the innovative program TechCube, which provides networking and mentoring opportunities, as well as office space, to promising digital companies.

Israelis spends more time online per capita than any other country, and Tel Aviv is a cultural capital with a young population, creating the perfect combination for a forward-thinking community. According to Mashable, Tel Aviv is home to over 5,000 tech companies thanks to venture capital funding and the Microsoft Ventures program that mentors young start ups.

In October 2011, the UK and Israeli governments launched a partnership known as the UK-Israel Tech Hub at the British Embassy in Israel. The goal of the program is to help Israeli ideas “go global”via British partnerships, who will benefit competitively from Israel’s culture of innovation.

Companies like Codename One, a platform for creating mobile applications that are compatible across all major operating systems, are examples of the originality and advancements found in Israel. Considering the city has the highest density of start-ups in the world, we’re expecting to see a lot more from this city soon.

Dublin is wired. Free wifi is everywhere – from restaurants to buses and probably even the toilets – and it’s no surprise. Dublin is being dubbed the Silicon Docks, with tech giants like LinkedIn, Twitter, Facebook, Google, Amazon and PayPal setting up European headquarters on the Emerald Isle.

Like Tel Aviv, Dublin has a young population, and it boasts a low corporate tax rate that attracts entrepreneurs. Furthermore, Paddy Cosgrave has become somewhat of a celebrity in the tech world through organizing two leading tech conferences that have attracted top investors.

The pub tradition and the welcoming culture of Dublin also make networking a breeze. Connor Murphy, co-founder of Datahug, said he ran into Dropbox’s head of business development at a pub very close to his company’s office. “Then in the door walks Paddy Cosgrave,” he says.

Dublin even has its own start-up hashtag to promote how awesome of a place it is for new business: #bestplacetostart.

The ongoing joke in Bangalore is that if you knock on a door you’ll either meet a start-up or somebody planning a start-up. Bangalore is a top 20 city in the Global Start-up Ecosystem Index, making it to number 19 in 2012. The spirit is there, though according to the Start Up Genome report, India lacks the infrastructure to help start-ups flourish.

However, engineering schools in Bangalore supply talent to the IT economy, encouraging elite companies like Microsoft, HP, and Infosys to set up offices in the city. Biotechnology is another sector where Bangalore thrives.

Though the government may not be teaching students to be entrepreneurs, they are training people who can do exceptional work. With India having the second-largest population in the world, the market for technological advancement is there with a large pool of budding business owners.